With this article I aim to introduce the topic of adultery in Georg Büchner’s work with a focus on female sexuality, and the relationship between sex, murder and madness. Adultery appears as a final trigger for madness and murder, which is seen as a substitute for the sexual act between the spouses, especially from the husband’s perspective, when the wife’s adulterous relationship with her lover avoids sexual contact with her legitimate husband. Behind that, the social context where the story develops is especially important for the author’s social critique of German politics in the 1830s under the kingship of Prince Metternich. 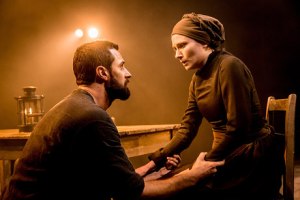 The Old Vic Theatre at London is hosting till the 13th of September Arthur Miller’s play The Crucible (1952). As I am working on a chapter on Hawthorne’s The Scarlet Letter (1850) I am becoming familiar with the New England society in the 17th C, which easily brings to mind the Salem’s trials where some of Hawthorne’s ancestors participated. Thus I felt full of curiosity for Miller’s play, and I really recommend this representation at the Old Vic, it was excellent, a wonderful adaptation with great actors and a very moving acting. The play runs for 3 hours and a half but time flies in such a touching piece of work whose main virtue, I think, is the lack of action and the great dialogues full of feeling and at some points also comical. Hope, anxiety, pity, love or fear are some of the feelings the actors achieved to raise among the public, it is a cathartic piece of work in the Aristotelian sense; behind that, the aesthetics are very well chosen, it is beautiful to see the mise en scène and the whole atmosphere, I wish also to point out that the play has been faithfully adapted, it is not a modern and free adaptation but really settled in the 17th C Massachusetts which helps you to be there.

So, as has been suggested above, The Crucible deals with the Salem witch trials in the Puritan community. To sum up the facts: a group of girl teenagers from the Puritan community go out a night in the woods afterwards one of them is afflicted by some unknown malady, and as it was proper of the place and time, they suspect she has been possessed or gone into some kind of witchcraft. One of the girls starts to think and talk about spirits in the woods and panic arouses: all the girls who were in the woods start to behave as if possessed, which is, after Freud, a hysteric outburst. We may say now with Freud and Foucault that the discourse of the community is so powerful that the girls end up believing they have been victims of witchcraft and one falls after the other: collective hysteria. So, the interesting point is that these teenagers -and I think this age matters here as the introduction to womanhood, sexuality- start to accuse of witchcraft to almost every single woman of the community, that is, puritan mothers and wives. And that is the point I wanted to arrive at: teenagers belonging to a society with a terrific control over sexuality and the female body accuse women of being witches; women is what they are becoming, so a possible interpretation of the situation is the young girls’ sense of alienation with their own bodies and upcoming sexuality. Of course they are unconscious of it, but they are unclosed within the puritan discourse which demands of them to negate the experience of their puberty till, it may be said, it appears taking another form, that is, in the form of possession because this word belongs to the same discourse, so they are familiar with it, and it does not only belong to the same discourse, it is the evil part of the discourse, so is their bursting sexuality.

The situation goes completely out of control, and any woman is arbitrary accused of witchcraft by the girls. The trial is looking for witches, that is, women, so they are the scapegoat of a neurotic discourse, and I dare say, in this case it is a patriarchal one: women were the victims of the discourse, they were seen as dangerous, dangerously powerful, in the puritan context, they have a dangerous sexuality, they attract men to sin. That can be seen as the male control of the female body because they were scared of its power of seduction, and the girls in a sort of reaction against their own future bodies attack women as looking themselves in a mirror.

What I find most interesting here is the relationship between the text or discourse, and the body in this particular context; there are more to say about it but maybe in another moment.

If you wish to see the play: http://www.oldvictheatre.com/whats-on/2014/the-crucible/

Punchdrunk Theatre Company has dared to submerge the audience in a Gothic-Surrealist atmosphere like in its very well called Immerse Theatre. Temple Studios, a large and high old building, is the chosen place where the adaptation of the gloomy Büchner’s work, Woyzeck, is taking place in the city of London.

The spectator is introduced to the dark scenario wearing a white mask which allows him to differentiate between the public and the actors. Immediately he finds himself locked in a metallic lift where his journey to an unknown world of sex, violence and despair begins. The spectacle is distributed among different floors and spaces where darkness and bright colours are intertwined to create a high tension experience behind different musical tonalities which make of the journey a very sensorial one. Indeed, the play is based on effects, dancing, body expressions rather than on narration.

Every character has his own story and the spectator is left to follow the destiny whomever he wishes running through corridors, scales, and sandy or wet grounds. The adultery story of Woyzech takes now place in some uncanny Hollywood studios where young actors die mysteriously and relationships are unreliable. Immersed in the life of the characters, the spectator becomes a voyeur completely ignored by the actors; he can touch all kind of structures and decoration, open drawers, read letters, observe closely the reactions of the characters being always unnoticed.