The large tradition of Confession in the Western culture is developed by Michel Foucault in his History of Sexuality from a very challenging approach as he usually does. According to him, the confessional pattern goes from a religious practice to a medical one highly developed in the 19th century. Sexuality has always been one of the main victims of these two methods becoming thus scrutinise until the minimum point. Narratives of sex have been usually presented as “confessions” of intimate experiences, not because the narrator could feel himself as a sinner or deprived -in psychoanalytical terms- but because of the strong powerful tradition of confessing something unusual which is attached to the will of knowledge.

The structure of confessional narrative can be seen as well in works such as Frankenstein or The Turn of the Screw, where a story is explained inside the story in an epistolary form. There is something there which should be told, which cannot remain as an individual experience. It is the necessity of confession detached of its religious aims but still surviving as a path towards knowledge. The same kind of narrative is presented in The Immoralist by André Gide; in this case it is a sexual one, which links the text again with Foucault’s theory.

In this short novel, Michel encounters his best male friends to confess his truly self, that is, his homosexuality. The novel was published in 1902, its themes are indeed very modernist ones. Together with homosexuality, the importance of the body and sensuality as paths towards self-knowledge, beauty and art, are some of the topics one can encounter in it. In fact, homosexuality is not explicitly expressed until the very last sentence of the novel. What arouses in Michel in his twenties is the apprehension of beauty. While he is extremely sick, he finds out in Africa beauty, something that he had not discovered earlier. It is through the beauty of healthy manly bodies that he experiments a strong desire for life. The setting in this part of the novel, Africa, evokes colour, smells, sounds, all what can be perceived by the senses, and it is in fact through them that Michel experiments life. The body thus becomes a medium for knowledge, it is what is first experimented. The importance of the body is present along the novel as far as it expresses the inner state of Michel. He is in fact sick until he is able to find beauty around him, and this beauty is primary found in men. As he discovers himself, his healthy situation improves. In Freudian terms, the body and its sickness work as a metaphor of the self and express it.

In Chopin’s  The Awakening, sensuality is also a path towards self-awareness. Edna discovers her body and its sensuality and beauty when she begins to realise of her own identity apart from social conventions; it is a similar experience of that of Michel’s.

In this kind of self-realizations, the importance of nature as something which calls for the sensual impressions is crucial. The self is in relation with the whole at the moment of its own encounter. Nature and beauty are close to each other and the last one is especially crucial to relieve one self.

The Others (2001), a film by Pedro Amenábar, is an interesting adaptation, though a very personal one, of Henry James’ novel The Turn of the Screw (1898). If in the film, the two children are alive and the two apparitions represent to be death, in the novel, the two children are death and the supposed phantoms are not so but alive intruders in the house. This difference makes a kind of mirror effect between the novel and the film, both being highly thrilling in their respective forms.

The main point of the story remains in both sides: the role of the children in the relations between death and life. That’s exactly what the first narrator in James’ novel affirms to be “another turn of the screw” as two children in a scary story becomes more dreadful than just one. In fact, the first inhabitants of the house to be aware of the presence of the others are the children. But in this case there is as well another mirror effect. In the novel, the little boy is more liable to see the phantoms, while in the film, it is the girl who first realises of the presence of the others.

Both the novel and the film present together a similar story from different points of view. If true that Amenábar did not offer a faithful adaptation, his creativity is nonetheless valuable. In fact, the best way to approach the film is keeping in mind the novel and vice versa. Moreover, both mediums writing and film making are also complementary which provokes a nice encounter between two different periods of time.

Kate Chopin, the American female writer during the last 19th Century, presents a a very suggesting atmosphere in her great novel The Awakening. Indeed, the first part of the novel is settled in Grand Island, a place which seems to be catch by a mysterious and spiritual environment. The novel is full of symbology: birds, music, dreams, the sea, the moonlight, are some of the elements which appear repeatedly. The dreamlike atmosphere is present most of the time in Grand Island, and with it, the references to “sleeping” and “awakening”, as metaphors for the acquisition of self-consciousness and the birth of a new self, remind psychoanalysis, especially, The Interpretation of Dreams.

Women have a prominent place in the story establishing between them peculiar relations. The friendship between Edna and Mademoiselle Reisz, for example, is close to be that of master and disciple. Mdm. Reisz is an old and unconventional woman, she’s gifted with the piano, and knows the secrets of Edna’s heart. She seems to light up Edna’s new way to arrive at her new self, and she also advises her of the difficulty of the task:  “The artist must possess the courageous soul that dares and defies.” But Edna is not just an artist is a woman who wants to live like an artist and to get her own income. In contrast to Adèle Ratignolle, who is a wonderful wife and a charming mother, Edna represents the New Woman of the turn of the century. Her position is thus between Mdm. Reisz, a pioneer, and Adèle, a traditional woman. Neither the former nor the latter lack in attractiveness, and in fact, Edna is moving around these two figures. Mdm. Reisz possesses independence while Adèle is beautiful and fertile.

It could be interesting to analyse the relation between the symbology and the female characters of the novel. The moon has been traditionally linked to the feminine,the sea, as Langer affirms, is a powerful expression of life which can be associated to female fertility (it is interesting to see how it appears in several novels with strong connections with women), music and dreams are both mysterious and they suggest an intuitive mode of knowledge. The list could go on. 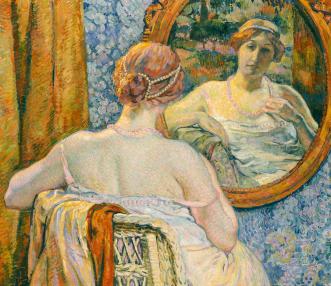 The Awakening by Kate Chopin (1899) has been seen as a novel of adultery, as for example, Madame Bovary, but I don’t really think that the main problem of Edna- The Awakening‘s main character- is a matter of love. Edna is much more than a problem of  satisfactory marriage, she incarnates the history of women in the Western society. Edna is introduced to the reader reflecting a problem of identity, her unhappy marriage is just a parcel of such problem. Edna doesn’t know neither who she is nor where’s her place in the world. At the beginning of the novel, the reader finds Edna as a wife concerned  about her husband, trying to do her best to get a peaceful home. However, something is awoke within herself while listening a piano concert; here music plays a significant role. I’m currently working on this topic in my research, that’s the influence of music in the souls, and especially in the novel of adultery. By now, I’ll go on  with the idea that music, and later, her relation with Robert, make her conscious of herself, of her inward. I’d say the sea plays a role here as well, but that’s another topic for another moment. Thus, adultery is just a tool through which she becomes aware of her whole life, and it’s from this point she decides to change. The next step is painting, so art. She loves painting but she had never before taken it seriously. Painting is the first expression of her awareness. I find it a very interesting point; she becomes more and more herself through her artistic expression, I think that’s another point to analyse: how art is related to self-consciousness. Finally, she becomes independent, she earns her own money and buys an apartment. At this point, her love relations aren’t so important, that’s the reason I think adultery isn’t the main point in the novel. Instead, we can se how Edna acquires consciousness of herself as a woman in society (the title itself refers to an awakening) which corresponds to the history of the independence of women. I guess the important point in such a history isn’t sex or money but consciousness, and through it, inner-freedom.